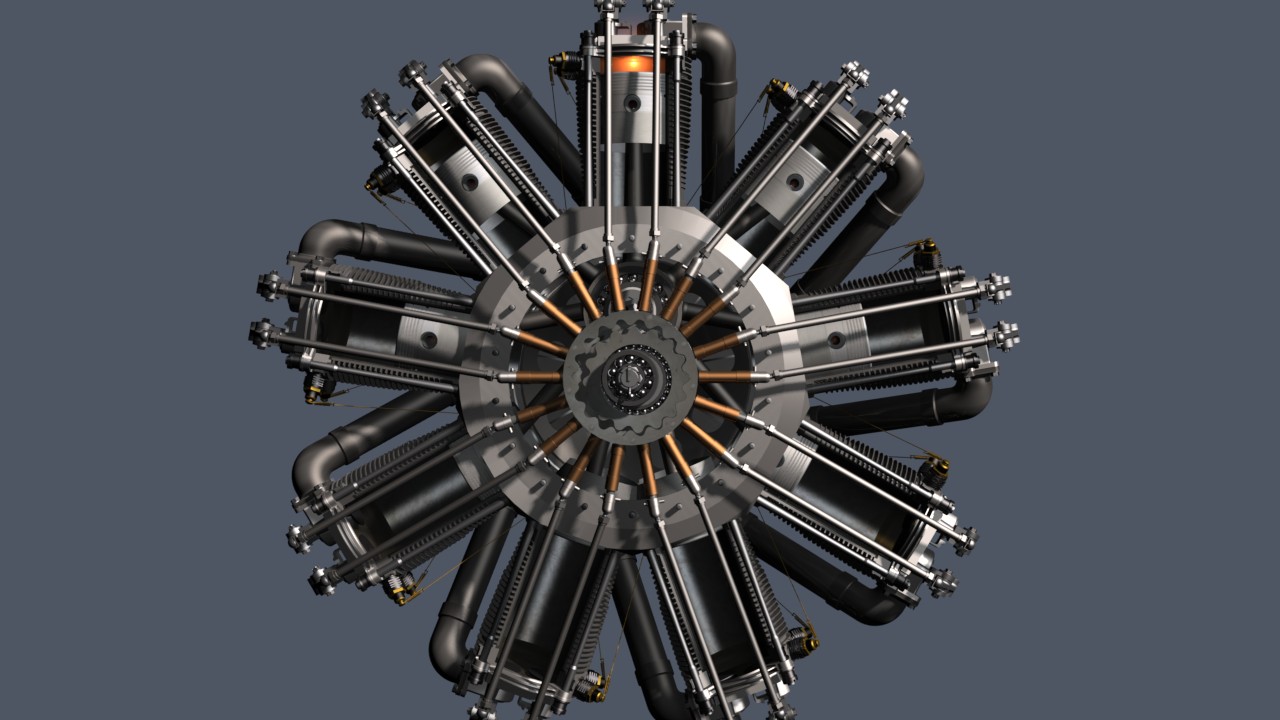 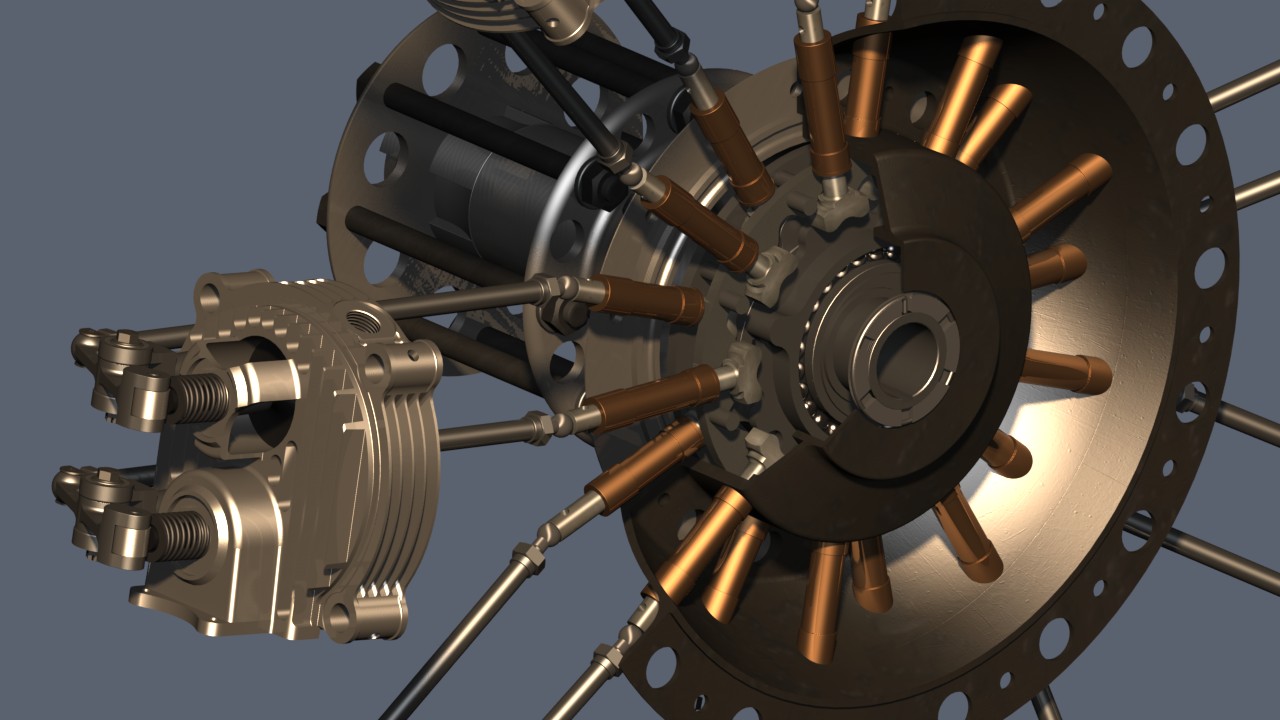 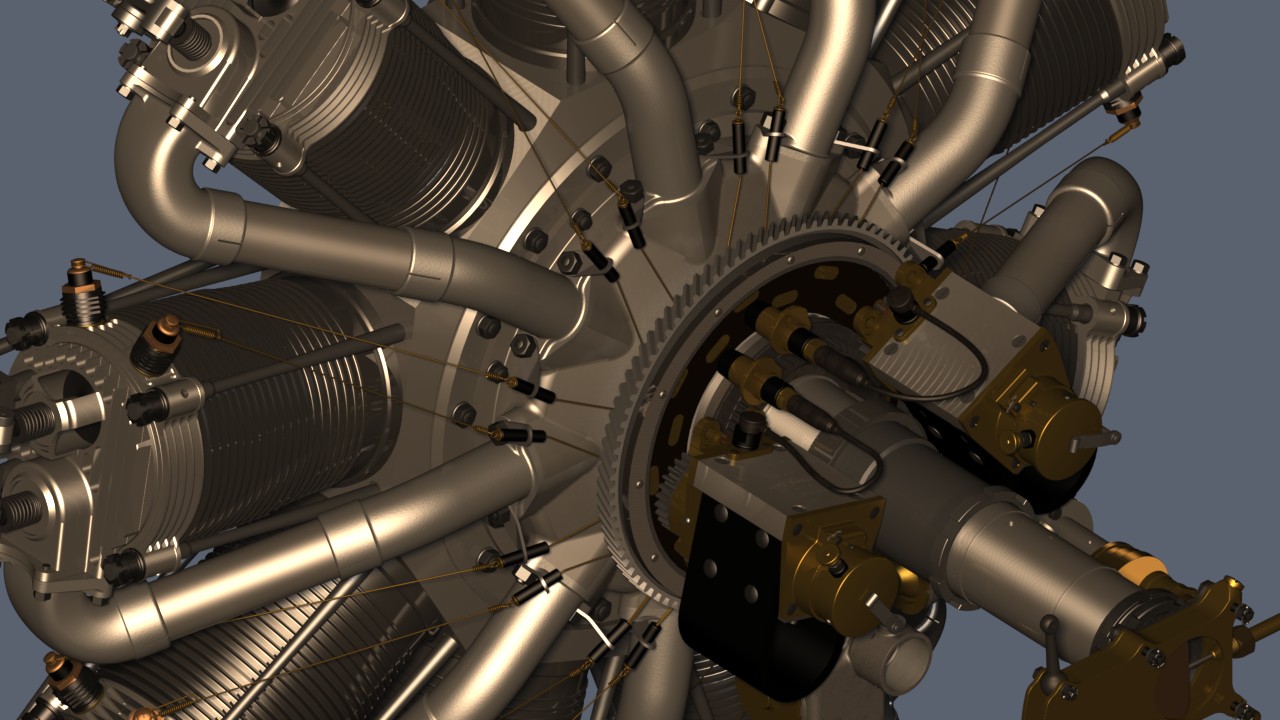 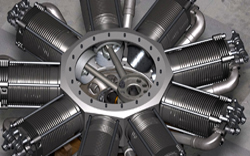 The Bentley BR1 was a British 9 cylinder rotary aircraft engine of the First World War.
Designed by the motor car engine designer W. O. Bentley, the BR1 and later the BR2 were built in large numbers, being one of the main power plants of the Sopwith Camel.

The Bentley BR.1 was basically developed from the Clerget 9B engine, see Bentley aircraft engines.

The Clerget engines where expensive (£ 907) and prone to overheating, so the Admiralty asked Lieutenant W. O. Bentley, being an established pre-war engine designer, to produce a modified version of the Clerget to solve these problems.
After various experiments conducted on some Clerget engines, Bentley decided to build an engine with aluminum cylinders with cast-iron liners pressed into it and aluminum pistons. The aluminum cylinders had better thermal conductivity and would cope with the unequal cylinders cooling issue, which was a problem for rotary engines. The air-cooling of the rotating cylinders led to unequal temperatures at the leading and trailing sides of the cylinders and caused distortion.


The stroke was increased to 170 mm (6.7 inches) thru which an increased of power up to 150 hp was achieved (110 kW).
For ease of maintenance, the (steel) cylinder heads were made detachable from the aluminum cylinders. The mechanism for the rockers was re-designed to have the trunnion supported on a double bush. End-rollers were used to reduce friction at the inlet and exhaust valve junctions.
The Crankcase was machined out of one piece and the cylinders and heads screwed in place by four long threaded bolts.
For reliability reasons, the dual ignition system of the Clerget was kept.

The engine was initially named Admiralty Rotary Mk1 (AR1), which evolved into the Bentley Rotary (BR1) and later the BR2.

To meet the requirements for stripping and assembly, the Crankshaft is made of two pieces. The main (large) piece with the crank pin and the smaller Maneton piece. Both parts of the crankshaft are hollow throughout, thereby gaining lightness, forming a part of the induction system, and allowing entrance for the oil tube.

Bentley engines where fitted with the Tampier Bloc-tube carburetor and throttle-mixture control levers, but reducing power when landing involved simultaneously adjusting the throttle and mixture controls and was not straightforward. It became a common practice during landing to "blip" the engine as well.

The Master rod carries eight wrist pins, to which the auxiliary rods are attached, and the main rod being rigid between the crank pin and piston gudgeon pin determines the position of the pistons.
Pistons of aluminum alloy with cast-iron piston rings, are fitted to ensure full compression, sealing and heat dissipation.

Hollow connecting-rods are used, and the lubricating oil for the pistons pins are passed from the crankshaft through the centers of the rods.

Each cylinder has two valves to control the inlet of a fuel/air mixture and for outlet of exhaust after compression and combustion.
The cylinders have two spark plugs which are powered by Magnetos instead of a battery. This design improves reliability and this is an important consideration in aviation. Combustion produces high energy that is transmitted to the cylinders and crankshaft.

These rotary engines had no exhaust system. The burnt gasses were simply released from the tops of the cylinders.
They used a “total loss” oiling system, where the oil was exhausted with the burnt fuel, coating the aircraft with a heavy sheen of castor oil.

This also accounts for the pilot's use of a flowing white scarf. Not only for a dashing image, but to wipe goggles clear of the persistent oil mist flowing past the cockpit.

A known feature of Rotary engines was its use of Castor oil. The reason is lost until we examine the lubrication system in detail.
With the fuel and oil mixed together in the crankcase it was important that the fuel not dissolve the oil and ruin its lubricating qualities.

The perfect choice was pharmaceutical-quality castor oil-it would stand the heat and centrifugal force, and its gum-forming tendency were irrelevant in a total-loss lubrication system. An unfortunate side effect was that pilots inhaled and swallowed a considerable amount of the oil during flight, leading to persistent diarrhea.


Both the inlet and the exhaust valves are mechanically operated by push-rods and rockers. Induction pipes are carried from the crank case to the inlet valve casings to convey the mixture to the cylinders.

Inlet and exhaust valves can be set independently of one another - a useful point since the correct timing of the opening of these valves is of importance. The inlet valve opens 4 degrees from top dead center (TDC) and closes after the bottom dead center (BDC) of the piston.

The exhaust valve opens 68 degrees before the bottom center (BDC) and closes 4 degrees after the top dead center (TDC) of the piston. The magnetos are set to give a spark in the cylinder at 25 degrees before the end of the compression stroke.

Several versions of the Bentley BR1 were built by various engine manufacturers for the Admiralty.

Manufacturing and testing took place at Humber Motor Works Ltd. and the Crossley Works.
In addition, engines were built by companies like Gwynnes, Vickers and Ruston & Proctor for the RFC, with outputs ranging from around 125-150 hp.

For the ignition, two Magnetos, mounted on the Central support, where used for ignition. The magnetos are driven by the main driving wheel and are connected via the carbon brushes in de brush-holders, to the two rings of contacts on the distributor. The engine uses two spark plugs per cylinder, which are set to give a spark at the same time.

This image shows the two magnetos and High Tension cable to the brush-holder, mounted on the Central Support. Also shown are the two gun interrupters known as the Kauper Gear.

The engine driven pump is driven by its pinion, and through worm gear.
This pump has no suction valve, the air being admitted through the 4 holes in the barrel when the piston is near the inward end of its stroke.

(*) This engine driven Petrol Air-pressure pump was used for aircraft that didn't have and external air-pressure pump, e.g. the Rotherham air driven pump, mounted to the rear right cabane wing strut. To avoid stress and damage to the cabane strut (due to vibration), the pump was later fitted to the under carriage. This however was not liked by the pilots because they could not see the pump working.

The delivery valve is of the plate type and of ample size. The pump, in addition to supplying the air required to displace the petrol used, will deliver an ample margin to allow for reasonable leakage from the delivery pipe or petrol tank, and to deal with this excess air an adjustable relief valve is provided.

The Rotherham & Sons Ltd (Coventry) Patent Mechanical Air Pump was designed for putting Air Pressure in petrol tanks of Aeroplanes. The pump is adjustable and gives a range between one and ten pounds (psi). The pump is rotary with a stroke of 5/8 inch (15.875mm.) and is driven by a spindle and propeller.

This image shows the various air-pressure pumps that were used by Aero plane engine manufacturers.

The left version is the standard engine driven air-pressure pump most frequently used.
The pump in the middle has been seen on some other engines (e.g. Gnome engines).
The pump on the right is the wind driven Rotherham air pump which was commonly installed on the Sopwith Camel, mounted on the wing strut or under carriage.

The various parts that make up the Magneto. Also shown (bottom left clip and screw) is the provision for an earthing switch used to prevent the magneto from producing sparks when not required, by means of short-circuiting the primary coil.
Therefore any inductive effect in the secondary coil is prohibited. This shut-down switch will be connected to the screw terminal, protruding through the rear magneto end.

Cross Section of the “AVIA” Magneto

This image shows the cross section of the magneto, its various parts and the coil with the Primary (inner) and Secondary winding (outer). To the right, inside the brass end of the armature, the condenser / condenser “plates stack” is visible.

Close up of the contact breaker assembly which is attached to the rotating armature.
The “hook” shaped rocker is connected to the frame (earth) through the blade spring. One end of the primary winding of the armature coil is connected to the insulated central member (by the long central bolt), the other end is also connected to the frame (earth).
The fiber contact-breaker rocker heel will be pressed inwards when touched by either one of the two cam shoes inside the cam-ring. This causes the opening of the contact points, breaking the circuit (twice per revolution) and causes the induction of the H.T. (hight voltage) in the secondary winding.

The oil pump is driven by its pinion through the worm gear. Two cams, formed on the worm shaft, acting against the internal springs, force the regulating plunger (R) and the pump plunger (L) to descend.

This image shows the regulator screw by which the travel distance of the valve plunger can be adjusted and therefore the amount of oil being pumped by the oil pump.

The engine driven Oil Pump and its parts.

The speedometer drive/reduction gear box is mounted on the oil pump and drives the cockpit RPM indicator, which is connected by means of a flexible cable.

The function of this reduction gear box is to reduce the driving flexible cable speed to prevent undue wear.

This image shows the internal gears in detail.

The oil pump pinion (36 teeth) is driven by engine's main gear (63 teeth), making the oil pump rotating at 1 3/4 of the engine speed.
The reduction gear box reduces the speed to one-quarter of the engine speed to limit undue wear of the flexible cable.
The nut on the left is screwed onto the oil pump main shaft and drives the inner reduction gears through the spring coupling. The flexible cable is screwed onto the brass end of the gear box.

This invention relates to the device for actuating the throttle and mixture controls on aircraft. The usual method of actuating the controls on aircraft; for example, the controls of the carburettor, is by means of levers arranged to move through an angle which does not exceed approximately 90 degrees. The two control levers or handles are mounted in planes parallel with and in close proximity to each other so that the pilot may, if necessary move one or two together.

The petrol passes through a fine #30 mesh filter at the bottom of the body. The tapered needle position determines the amount of petrol that will be supplied from the selected petrol tank, through the output connection pipe, to the carburetor.